Designed to bring multiple wavelengths to a common focus with high efficiency.

A conventional diffractive optic lens utilizes a single diffraction order in which the optical power of the lens is directly proportional to the wavelength of light (see Fig. 1(a)).

Therefore with white light illumination, every wavelength focuses at a different distance from the lens. With broadband illumination this strong wavelength dependence in the optical power produces significant chromatic aberration in the image. For example, if one were to focus the green image onto a detector (or the retina of the eye), the corresponding red and blue images would be significantly out of focus and would produce red and blue halos around the focused green image. The result with white light illumination is a highly chromatically aberrated image with severe color banding observed around edges of objects, which is, of course, completely unacceptable.

The key feature of a multi-order diffractive (MOD) lens is that it is designed to bring multiple wavelengths to a common focus with high efficiency, and is thereby is capable of forming sharp, clear images in white (or broadband) illumination. As illustrated in Fig. 1(b), with a MOD lens the various diffractive orders bring different wavelengths to the common focal point.

The step height at each zone boundary is designed to produce a phase change of 2πp in the emerging wavefront, where p is an integer greater than one. Since the MOD lens is purely diffractive, the optical power of the lens is determined solely by choice of the zone radii, and is independent of lens thickness. Also, because a MOD lens has no refractive power, it is completely insensitive to changes in curvature of the substrate.

To illustrate its operation, consider the case of a MOD lens operating in the visible wavelength range with p = 10. Figure 3 illustrates the wavelength dependence of the diffraction efficiency (with material dispersion neglected). 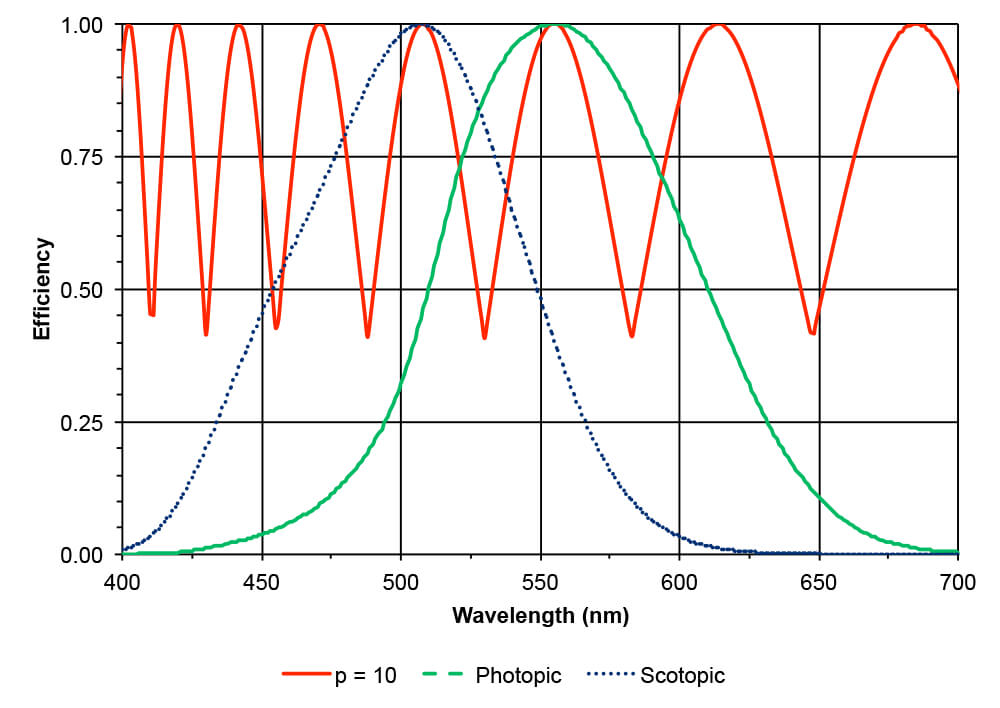 Note that several wavelengths within the visible spectrum exhibit 100% diffraction efficiency. As noted above, the principal feature of the MOD lens is that it brings the light associated with each of these high efficiency wavelengths to a common focal point; hence is capable of forming high quality white-light images. For reference, the photopic and scotopic visual sensitivity curves are also plotted in Fig. 3. Note that with the p = 10 design, high diffraction efficiencies occur near the peak of both visual sensitivity curves.